Today was all about the kindness of strangers, and how quickly a stranger can become a friend. It was about sharing a bike ride, some good laughter, stories, food, drink and moments to remember.

Got to get to know Ron & Dianne this morning as I enjoyed the wonderful breakfast they made, plus they put out about three kinds of cheese, I love cheese. Dianne was off to play tennis after breakfast. Ron & I went over some maps, weighed my bike & gear.

Ron biked with me out of Deep River, through the beautiful neighborhoods and on to the back roads. When I remarked it was such a beautiful town explain that there’s a lot of scientists that live there. Deep River had the highest population per capita PhD’s at one time.

This is what he explained to me:

It was a planned community built in 1944 by the federal government as part of the Manhattan Project, to accommodate employees of the nearby Chalk River Nuclear Research Laboratories. It was an offshoot of the nuclear effort for the allies and scientists, engineers, and tradesmen from around the world who came to work on the Manhattan Project. After World War II, Canada continued on with research into the atom, and dedicated the country to the peaceful uses that could be derived from putting the atom to use. Deep River was situated far enough upwind and upriver of the Chalk River research reactors to avoid radioactive fallout.

Ron worked at the Nuclear plant, he is an engineer specializing in O-rings he even worked on the investigation of the shuttle Challenger explosion. Which was the result of a faulty O-ring.

Got back to Highway 17 & said our goodbyes.

Headed into Petawawa then down to Pembroke.

Along the way a another local biker passed me, slowed down to remarked that I must be going a distance told him I was from BC. He had a shamrock tattoo on his shoulder and I said “like your tattoo” because it reminded me of Dublin when I ran the marathon.
Got into the campground and was immediately greeted by a really friendly guy offered me a cold bottle of water and I took it no problem and a beer. Told him I was going to set up camp and go for a shower first but he said come on over for burgers, they would be on the BBQ later.

Went down to the beach, very sandy, shallow water, Ottawa River, walk over 100 yards out, never got above my waist. A Guy was telling me you can walk across to the Quebec side at some points.

Above : the huge meal 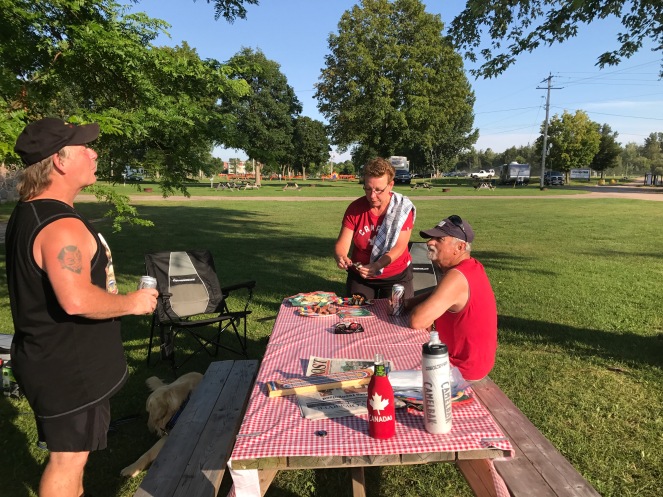 After the beach & a shower and Stan ( he’s from Newfoundland) invites me again, I went over to visit them in their campsite. And I’m really glad I did. I put off going uptown. Laurie, Stan & their dog Charlie were Great they offered me a drink actually a couple fed me burgers hotdogs salads. And the funniest part is just before dinner Frank shows up to visit them. Stan and him were in the Armed Forces together they were paratroopers. Long time friends. The Real Deal! Anyways turns out as we are getting introduced, he’s like “we’ve already met” shows me his shamrock tattoo on his arm, he’s guy that passed me on the bike. Too funny. Well what a perfect night, lots stories, Frank & Stan telling good old day stories ( literally out running the cops stories) so lots of laughs too. Lori’s brother Kevin and his wife Debbie their kids Brett, Allison & Bentley (their dog) came down too, they live in Pembroke. More stories & laughs . All great people. Laurie got out her guitar for a few songs around the fire. What a night to remember.

The gang- missing is Brett 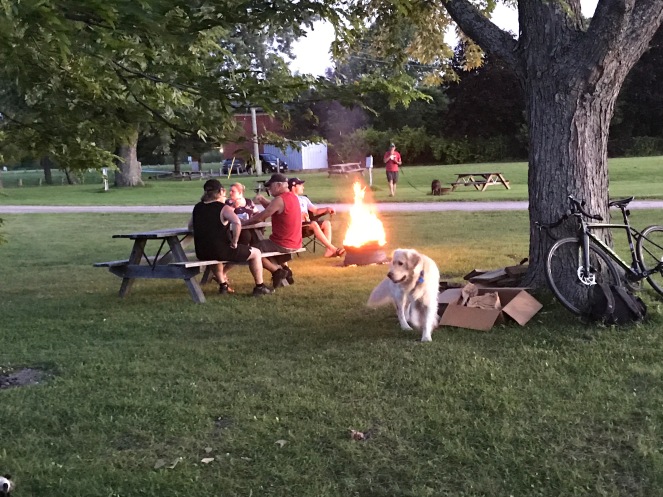 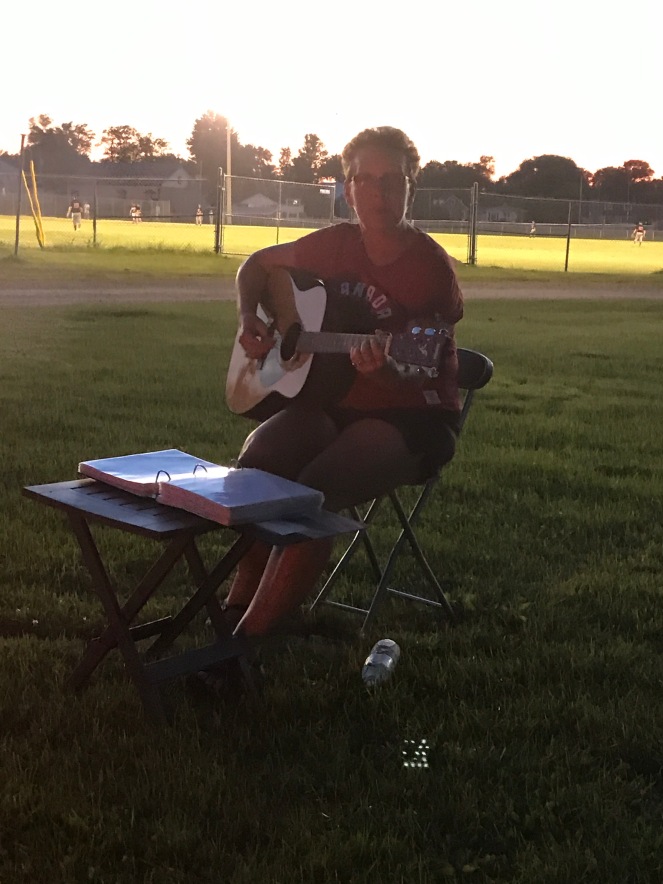 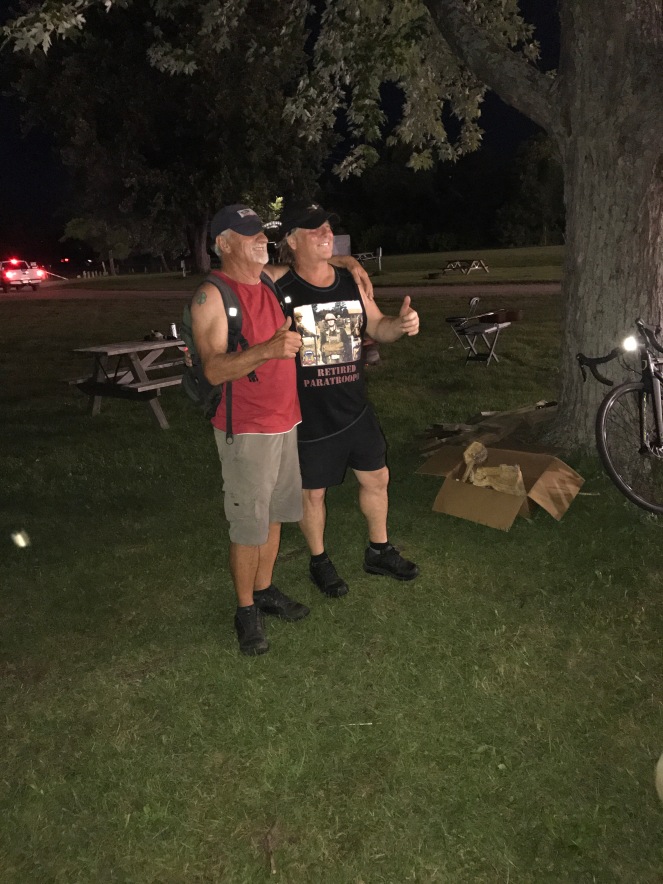 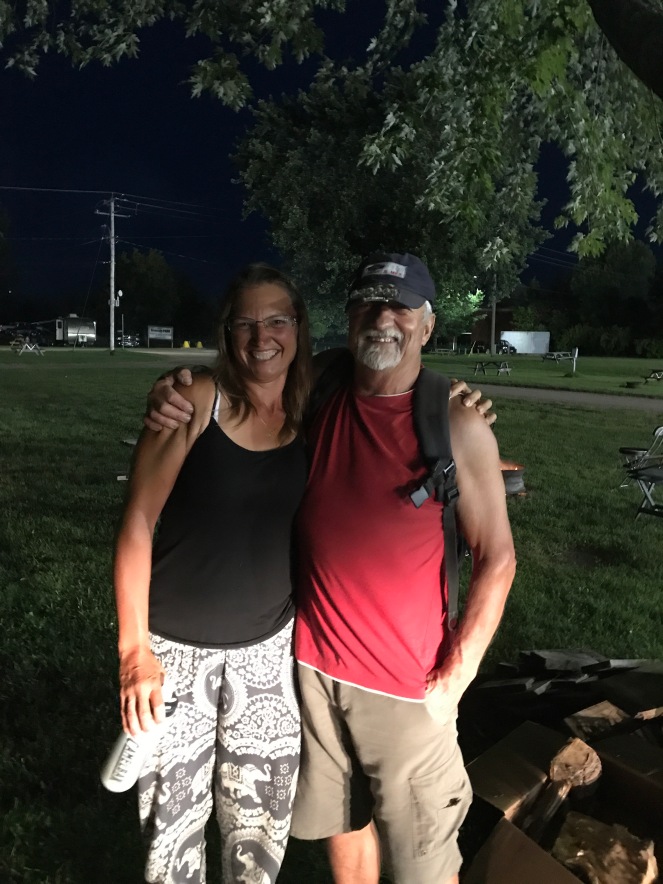